Why Manual Article Rewriting Is Super Important For Ranking On Google

So why is manual article rewriting important for ranking on Google?

You’ve attempted to have your article re-written using one of those free softwares on the internet at least once or twice but your article ended up looking ridiculous, as if it had been written by a robot.

The inconsistency and the robotic jargon must have left you wishing you did it manually and, yes, you should have done it manually not just to make the article sound good, but also for great ranking on google.

It is an undisputed fact that content writers in this .com generation will bend over backwards to secure their article’s position at the top of search engine ratings and results.

Nobody wants to Google their work and have to peruse through a dozen pages of Google results to find it; and by using the basic methods and even more advanced methods to get ranked at the top, website developers and content developers are not leaving anything to chance.

If you have been wondering how Google has the best and most recent content at the top of their page the you should know that Google uses an algorithm, (a program written to solve a particular problem) called “google caffeine” to check for new, exciting and different articles and this means that articles are the most recent are at the top of the search ranking.

Rewriting the articles makes them newer and more exciting than just machine edited articles and this usually increases the ranking on the Content.

A new article that could just be describing the same thing as an older article is usually rated better because it is a new article. The newer the better is like the basic building and working block of the algorithm.

More often than not, the algorithm works like a spell checking algorithm where it asks “ignore all?” and it automatically clicks ignore all if the articles are all in the same format and talking about the same thing and especially if the thing is said in exactly the same words.

Still not convinced that manual rewriting is the way to go?

Well, here are 8 good reasons for manually re-writing or paraphrasing your articles…

Just as lecturer is inclined to punish you if they caught you with a duplicated article from your classmate, Google’s algorithm does the same thing. The punishment might be as mild as a slap on the wrist, so to say, or as severe as totally locking you out of your content writing and rewriting account. Having rewritten the article yourself manually (key word being “manually”) usually doesn’t use automataic software. You take an article saying one thing in a few sentences and you might be successful in describing the same thing but in very very different words.

However, if you were to give an algorithm a given article and have it rewrite the article, it might just move a few paragraphs if not just mere sentences in a bid to be said it is the most effective and cheapest algorithm when it comes to article rewriting. At what cost are we going to have our article rewritten in just a few seconds? Duplicate article penalty is the most common punishment, duplicate articled could be de-indexed and when you search for them you don’t find them anywhere.

Most articles to be rewritten usually have instructions such as “use the word algorithm in the correct context a given number of times.” This is an easy thing to manipulate if you are rewriting the article manually and that is why manual re-writing is encouraged . However, if you were to instruct an algorithm to rewrite the article or the content for you, it would have used the correct keyword for the correct and instructed number of times, however, will the keywords be used in the article in the correct syntax and context?

A Sentence could be of correct syntax but that doesn’t necessarily mean that it is semantically correct and the technical . When this content is uploaded to google and the views down vote it, its ranking is going to go down automatically and this means that you will have to peruse through hundreds of pages to see where your article appears. However a manually rewritten article would have made sense and be a correct sentence and emphasize the keywords within the appropriate context.

In Google searches, the significance of page and content updates is usually seen as a freshness factor and this means that, while moving around a few lines of content is an update, a more significant and almost drastic update is considered more worthwhile.

That is, the more content you remove or add, the better. An article rewriting algorithm would basically move a few lies here and there and call it a day, or at least call it a minute because the rewriting is done in a mere seconds or even microseconds. This is not going to improve your ranking and your position on google, however if you were to remove and add huge chunks of data from the given content, then your article and content would be highly rated by Google’s algorithm.

Not doing this may actually hurt you having too many reference that might not even be relevant. New, relevant and credible sources has Google algorithms up voting it as much as people upvote it. This is especially in areas where the expertise, and/or authoritative sources are needs, these areas include medicine, engineering and technology among others.

Bullets and numbering may make an article look a whole lot better and these are often discarded by the article rewriting algorithms. Rewriting manually has the rewriter add necessary lists and bullets and thus break up the content. This is a good thing because then Google agrees and actually prefer content that has the items in it broken down. When readers see content that is broken down in bullets it is easier for them to find it,  read and understand it and then they upvote it, the article then gets the recognition it deserves and this in turn makes its Google rating better.

Contextual links and hyperlinks are added manually so there is no two ways about it; and the numbers of hyperlinks added during rewriting usually have a stronger impact on the article than the original article.When rewritten, a rewriter can add as many as possible links in a given content. These links embedded in a given page’s and content’s body usually are considered more than an article with no hyperlinks and contextual links.

The position of the links is also as important as having the links in the first place. Links that are added in the beginning or the top part of given contented gave the content better rated than those that actually have the links at the end of the content. This is because google algorithm goes through the beginning part of the article to deduce its relevance and when you manually write the hyperlinks you can add the hyperlinks at your own pleasure.

Rewriting the content and adding useful, controversial or captivating information usually brings a lot of traffic your way and this consequently dances in your favour by having users comment. However having an algorithm rewrite your content would not have added any more useful information into the content and thus would not have driven all that traffic and interaction your way, these comments are seen as a signal of quality content and  available user interaction.

While not using an algorithm to increase the number of keywords, other algorithms ask for the expected keyword density. This is taken by the algorithm and when it is considered the algorithm might put too many keywords in the article and hence lead to over use of the keyword almost to monotony.

This is usually known as over optimization and it hurts more than it saves the content. Content with keyword overuse is said to be decorated and of poor quality.

While an algorithm may over optimize, another one may under optimize or not even ask for the keyword. In a situation where no keyword is found to be used google cannot categorize the article because no keywords have been used and this is usually known as under optimization.

Rewriting articles may be cumbersome and time consuming; it is often easy and enticing to take the shortcut, however this can lead to major offences and land you in a whole lot of trouble with Google.

Your content may end up being considered fraudulent and thrown in the gutter because no one wants stolen, copied and incorrect content on the top of their page.

So we suggest that you choose the best article spinner or a paraphrasing tool to generate multiple articles quickly AND then manually re-write those articles to add the human touch and avoid penalties by search engines. 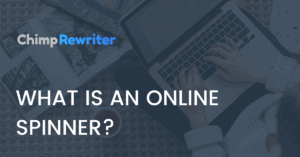 What’s an online spinner and what is it for?

An online spinner sounds like the holy grail of spinners, but is it really that good?

Join us at Chimp Rewriter and see for yourself! 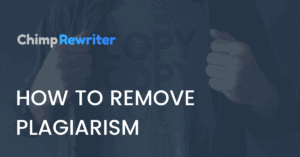 Great things take time. Take your time and learn how to remove plagiarism from your content with these tips! 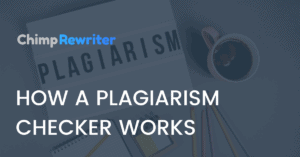 You might know how to use a plagiarism checker, but do you know the ins and outs of how they work?

to your unrestricted 14 day trial!

to your unrestricted 14 day trial!